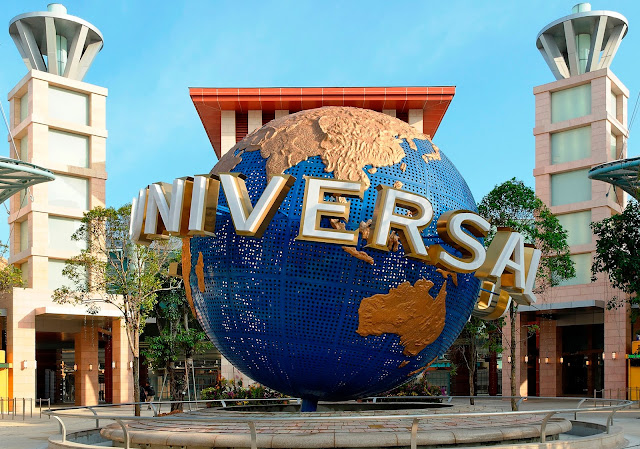 Located on the small island of Sentosa, Universal Studios in Singapore offers world-class entertainment and wonderful shopping.
It is the only place in Singapore that allows you step directly into the movies. The park features many entertainment experiences and movie-themed attractions.
Visitors to Universal Studios in Singapore will love the Far Far Away Land, where fairly tales come true. This section of the park features tall stone walls surrounding a courtyard with pavilion. Some of the rides and shows available in this magical land include an interactive live show with Shrek's Donkey, A Shrek Adventure in 4-D, the Enchanted Airways junior rollercoaster and the Magic Potion Spin, which is a Ferris wheel located in the Fairy Godmother's Potion Shop.

There is also the Canopy Flyer, which provides a pre-historic fly-over of the Jurassic Park and the Amber Rock Climb, where junior archeologists can scale the walls and search for fossils. Young children can also pilot their own Pteranodon on the Dino-Soarin' ride.

Universal Studios also features a life-sized rendition of Hollywood, where visitors can step onto the Walk of Fame and walk the Hollywood Boulevard. The Madagascar zone is modeled after the movie, where kids can go on a magical river boat ride with the Madagascar animals on the Crate Adventure or check out King Julien's Beach Party Go-Round.

Sci-Fi fans will love the Sci-Fi City. This city of the future contains a vibrant metropolis of the future and an intergalactic battle of good versus evil. Visitors can ride the large dueling roller coasters of the BattleStar Galactica Human or Cylon rides.
The Accelerator takes riders on a whirling and twirling ride.

Visitors can also take a trip to the grandest city in the Americas by stopping by the New York zone. Here the guests can experience the classic landmarks and sights of New York City. They will also find access to the Lights, Camera, Action program hosted by Steven Spielberg.
This event turns an empty sound stage into a full blown hurricane in just a few minutes. Finally visitors to Universal Studios in Singapore can visit the Ancient Egypt zone, where they are transported to 1930's Egypt. Here visitors can explore the Golden Age of Egyptian Discovery and see ancient pyramids and obelisks.

The Revenge of the Mummy is an indoor dark rollercoaster that outruns scarab beetles and warrior mummies. Treasure Hunters allows kids to drive their own jeeps into an abandoned excavation site.
Universal Studios in Singapore offers visitors plenty of shopping and dining experiences in addition to their entertainment tours. No trip to Singapore would be complete without stopping by Universal Studios to take in the sights and sounds of the world of movies.
Posted by asiatrip at 7:10 PM